A pediatric cancer of the pons in the brain stem 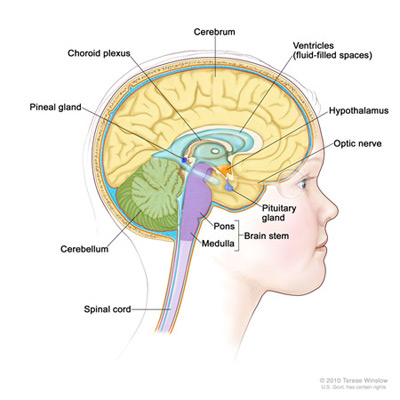 Diffuse Intrinsic Pontine Glioma (DIPG) is a primarily pediatric cancer of the pons part of the brain stem that is considered terminal upon diagnosis. It has a less than 1% survival rate and an average survival of 9 months. Less than 10% survive over a year, less than 5% over two years, and less than 2% over five years. It hits at least 4,000 children worldwide annually, murdering over 20,000 in five years, with a yearly incidence of 2.32 per 1,000,000 people. As a diffuse cancer in a vital and hard-to-reach part of the brain, it is inoperable. It can also be called a Diffuse Midline Glioma (DMG).

The pons controls the body’s vital functions like talking, walking, swallowing, sight, hearing, heart rate, breathing, facial symmetry, and even a child’s ability to hold their head up. DIPG takes a child’s functionality piece by piece before killing them, keeping them completely cognitively aware the whole time feeling and thinking as if they were completely normal; it tortures them to death.

There is no remission. No NED. 70-80% of children experience complete or partial relief from their symptoms for days, weeks, or months due to radiation. Radiation is the only standard of care provided to DIPG children and is considered a palliative treatment providing only a poorly named “honeymoon period” before the disease progresses. This standard of care has not changed in over 40 years.

20-30% of children – like Liberty – get no temporary relief from radiation at all.

Brain cancer is now the #1 cause of death by cancer in children, which is itself the #1 cause of death in children by disease. DIPG is the second most common brain cancer and the most deadly. It is random, not genetic or caused by environmental factors. Chemotherapy does not work and there has never been a Phase III clinical trial for DIPG. There are only a handful of long-term survivors.

Any child can be hit with the death sentence that is DIPG.

Any family can be struggling with their life sentence after the death of their child.

For Liberty's 11th birthday in August, the only thing we want is donations to the Love for Liberty Arnold-Simon DIPG Foundation to help bereaved pediatric cancer families as well as our local community. Every penny will go directly to funding the foundation’s unique programs. Donate through our fundraiser on Facbook, or you can donate to Love for Liberty Arnold-Simon DIPG Foundation through our donate page. Thanks for your support!